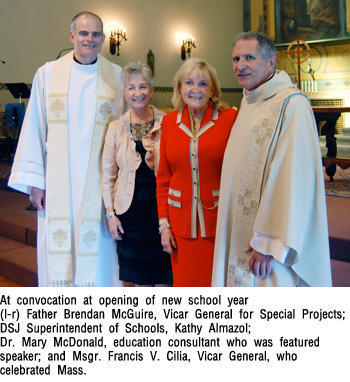 Schools opened on August 19 in the Diocese of San Jose for 2013-14 with a special convocation and Mass at Santa Clara Mission Church on the campus of Santa Clara University. Kathy Almazol, Superintendent of Schools, welcomed principals, teachers and staffs of the 28 elementary and six Catholic high schools, and introduced the featured speaker.

McDonald gave practical and spiritual advice urging her audience to stay focused on Catholic education, its meaning, and “how you got here. How did you know that you wanted to be in Catholic school ministry? You have a history with God. Where do you encounter Christ in your life? Do you want to share your faith?”

She recalled her own roots in Catholic education, in the mid-1960s. “I felt called by God,” she said. “I knew what teachers did. I was teaching; I was walking on water! Until the kids came in!”

She was at a large inner-city school in Philadelphia then; 53 kids in the class. “The students were not paying attention and by the end of the day, no one wanted to be in that class – including me! I thought I was drowning, but God said ‘get back in there and make me present to those children you serve.’” She went back.

Several years later she was asked to be principal, which she liked until her first day, when she felt like she was drowning again. “But God pulled me up again and I did my job to make Christ present in that school.”

McDonald was appointed a principal again and eventually was invited to be Superintendent in Memphis, Tennessee where she served for 35 years as a teacher, principal at two schools, and retired last year as superintendent after 14 years in that post.
Memphis Bishop J. Terry Steib had urged her to become superintendent and was concerned about inner-city schools which were largely closed; the remainder being “fragile.” McDonald recalled the bishop told her to find a way to make Catholic schools a presence in the inner-city – which was only four percent Catholic – and added, “We have no money.”

“So, I went home and got on my knees,” McDonald said. “Then I heard God speak to me in my heart — ‘learn to swim’ — that’s what God’s call was and still is. It is a blessing to work in Catholic schools, and you begin to expect miracles. We have to put God in charge. Teach your students that.”
She began to talk with lots of people in Memphis — Catholic and non-Catholic — and in the year 2000 the Jubilee Schools were born after a businessman phoned who was interested in helping children. In fact, two local men in business, both Protestants, said they wanted to help revive Catholic education in inner-city Memphis.

McDonald oversaw the opening of eight schools which had been closed from 8 to over 50 years, with the men’s multi-million dollar donation. Bishop Steib suggested they be called Jubilee Schools and they currently operate on a $30 million endowment, serving over 1,400 poor students, mostly non-Catholics.
She said the area is the “poorest zip code in the U.S. There is deep poverty, drugs and gangs, and parents need job training. It’s always a struggle. But remember, we are God’s arms in the world and, as Catholic educators, what you do matters to students, their families, your community, the Church, and to God.”

‘For your students and their parents, you are great examples of faith’

Msgr. Francis V. Cilia, Vicar General of the Diocese of San Jose, celebrated the Mass at the Catholic School Convocation and gave the homily, welcoming Catholic educators and calling them to “be examples of God’s living and abiding presence.”
In this Year of Faith, he said, “Let’s talk about faithfulness – your rootedness in faithfulness and your ability to share that with your students. Every new school year there are new endeavors, that take many forms, as well as a leap of faith. For example, this year the St. Katherine Drexel Initiative is rolling out in some of our schools.”
He called attention to the recent first encyclical of Pope Francis, “Light of Faith,” which, he said, “guides us through all things. We know our past, our history, but we don’t know the future, but each day we are making the future.
“As people who teach the faith,” Msgr. Cilia said, “We promise to be a light for all Christians and to live the promise which God promises us. We have to be able to articulate what we believe. For your students and their parents, you are great examples of faith.
“You know your faith is alive because you live it and question it. You are examples of God’s living and abiding presence. Be Christ to one another. You are the bridge to the past and the future. Let you faith be alive!”